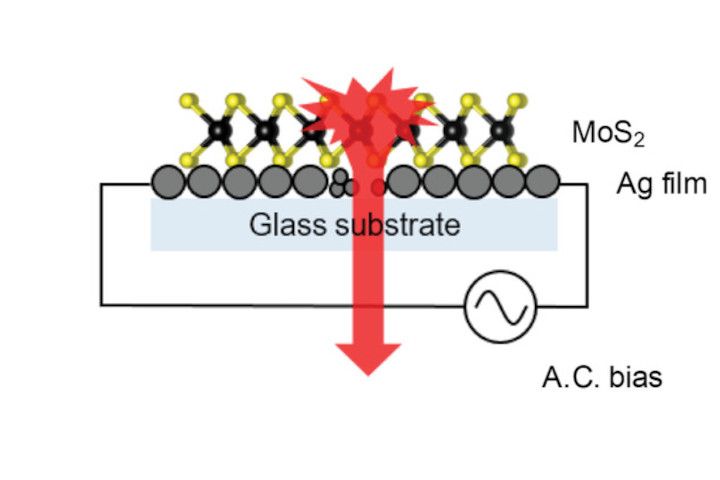 Break junctions in nobleâ€metal films can exhibit electroluminescence (EL) through inelastic electron tunneling. The EL spectrum can be tuned by depositing a singleâ€layer crystal of a transitionâ€metal dichalcogenide (TMDC) on top. Whereas the emission from the gaps between silver or gold nanoparticles formed in the break junction is spectrally broad, the hybrid metal/TMDC structure shows distinct luminescence from the TMDC material. The EL from individual hotspots is found to be linearly polarized, with a polarization axis apparently oriented randomly. Surprisingly, the degree of polarization is retained in the EL from the TMDC monolayer at room temperature. In analogy to polarized photoluminescence experiments, such polarized EL can be interpreted as a signature of valleyâ€selective transitions, suggesting that spinâ€flip transitions and dephasing for excitons in the K valleys are of limited importance. However, polarized EL may also originate from the metal nanoparticles formed under electromigration which constitute optical antenna structures. Such antennae can apparently change over time since jumps in the polarization are observed in bare silverâ€nanoparticle films. Remarkably, photonâ€correlation spectroscopy reveals that goldâ€nanoparticle films exhibit signatures of deterministic singleâ€ photon emission in the EL, suggesting a route to designing roomâ€temperature polarized singleâ€photon sources with tunable photon energy through the choice of TMDC overlayer.