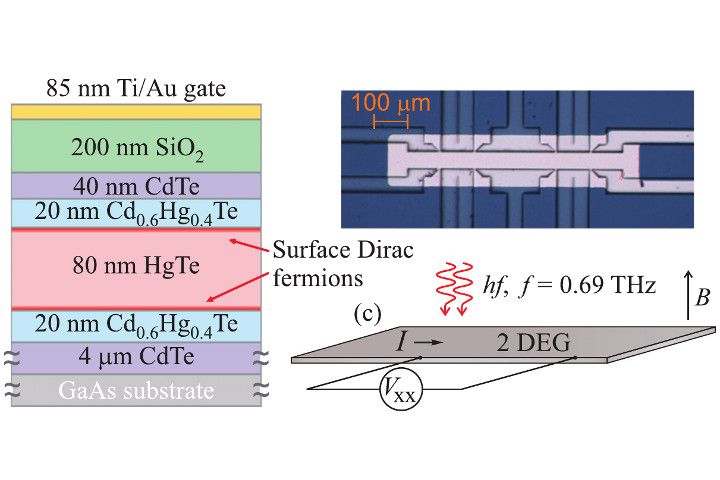 Three-dimensional TIs based on strained HgTe films have been the subject of an intensive study in the last ten years. This system is a strong topological insulator with electronic properties mediated by conducting surface helical states with close to linear dispersion with spins locked to the electron's momentum and is characterized by a very high mobility of the surface DF. The paper describes a detailed study of terahertz (THz) photoresistivity in a strained HgTe three-dimensional topological insulator (3D TI) for all Fermi level positions: inside the conduction and valence bands and in the bulk gap. In the presence of a magnetic field, we detect a resonance corresponding to the cyclotron resonance (CR) in the top surface Dirac fermions and examine the nontrivial dependence of the surface state cyclotron mass on the Fermi level position. At high electron densities, we observe THz radiation-induced 1/B-periodic low-field magneto-oscillations coupled to harmonics of the CR and demonstrate that they have a common origin with microwave induced resistance oscillations previously observed in high mobility GaAs-based heterostructures. This observation attests the superior quality of a 2D electron system formed by helical surface states in strained HgTe films.